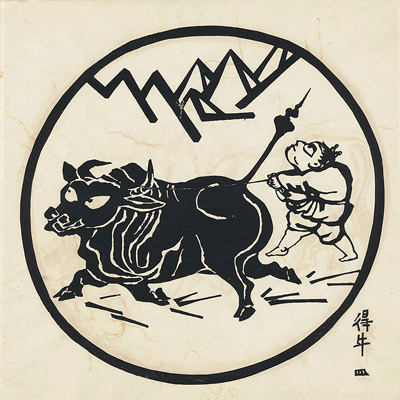 In a particular village in central Asia, children are not allowed to drink tea in the evening, until the family ox is stabled. No one remembers why this is the rule, but it has always been so.

You’d like to maximize detection of lazy children while minimizing social embarrassment. How to do this?

Unfortunately, discrete parameters don’t play nice with newer, modern MCMC algorithms like Hamiltonian Monte Carlo and NUTS. You want to use NUTS, because it is a lot better than older approaches like Gibbs sampling. I wrote an entire post about the advantages. So people who learned to program models for Gibbs engines like BUGS find themselves unable to program their models in a NUTS engine like Stan.

The vast majority of models with discrete parameters can be easily coded in Stan, however. All it takes is a modicum of secondary school algebra. In the process, the models sample more efficiently and we learn something perhaps about the logic of modeling. Let’s see how to do it.

Algebra is never the answer, but it is always the path.

Is it worth your time, and potential embarrassment, to check the covered stables of children who are drinking tea? What about the children who are not drinking tea? Should you investigate them as well? If you had to choose, which nets you more empty stables, drinkers or non-drinkers? To answer these questions, we need a model.

The probability that a child drinks tea depends upon whether or not they have stabled their ox. Let

be the probability a child, who has stabled their ox, drinks tea. They don’t have to drink tea, so this number may be less than 1. Let

be the probability a child, who has not yet stabled their ox, drinks tea. This number is certainly greater than zero, because tea. Finally, let

indicate whether or not a child has stabled their ox. All together, these definitions imply this statistical model:

where the new symbol

is the proportion of kids who stable their oxen properly. The variables

are data for child

. Everything else in unobservable and must be estimated. Give these other symbols some priors to finish to joint probability model:

values are unobserved. We need to treat them like parameters, and Bayes will do the rest. Where is their prior? It is right there in front of you:

. This lets us do what priors are for: Average over our ignorance. The probability of observing a child drinking tea is, by the laws of probability:

This just says that the unconditional probability of tea drinking is the sum of the probability in each state—ox or not—times the chance of being in each state. It’s just the average probability over states. I’ve labeled the terms A, B, and C so we can refer back to them later. In the terms of our model, these become:

This is the bit that a Gibbs sampler does for you, by dancing over discrete states for the unobserved

values. It computes this expectation iteratively, by sampling. But we have the formula! The sampling isn’t necessary.

Finally, we can compute the probability that a child who is drinking tea has not stabled their ox. Bayes formula tells us that:

The conditional probability is just the joint probability (tea and no-ox) divided by the thing we want to condition on (tea). But wait. Where have we seen these probabilities before? Oh yeah, they are the terms A and C above! Substituting in the model symbols:

But this also means we need to fit the model, to get estimates of

from the observed oxen, before we can do the forensics on the covered stables. So let’s do that. Let’s fit the model, using the marginal likelihood.

Since we have the formula, we can just write it into our model. I’ll write the Stan model in pieces, so it doesn’t explode all at once and look more complicated than it really is.

First, we define the observed values that are input to the model.

We’ll use -1 as a missingness code for the stabled oxen. When s[i] == -1, that means the stable is covered, so we can’t see whether or not the ox is there.

Now there are three parameters to define:

And then the model block will calculate the log-probability of the observed variables, conditional on the unobserved ones (the parameters). This is where we average over—marginalize over—the unobserved oxen.

If you are already familiar with Stan models, then the only tricky part of this is the log_mix bit. All that function does is compute

But it does it with better precision. Remember, we keep things on the log-probability scale, or else small probabilities risk underflowing to zero. So log_mix, and its parent log_sum_exp (check the Stan reference manual), are really useful in these marginalization tasks.

To put this into action, we need some data. So let’s synthesize some.

Now run the Markov chains and draw samples from the joint posterior distribution of p_drink, p_cheat, and sigma.

So the model recovers the simulation values pretty well. But our goal is to decide whether it is worth inspecting stables of tea drinkers. That is, we want to compute C/A from the previous section. This is easy enough, at the posterior mean:

But we don't deal in posterior means alone. We want the entire posterior distribution. So just perform the calculation above for each sample from the posterior:

And now to plot it: 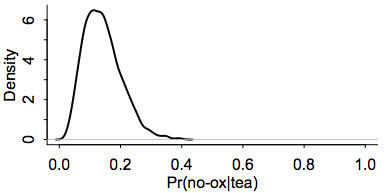 Most likely, a child who is drinking tea has properly stabled their ox. Why? Because the simulation assumed that most kids (75%) stable their oxen and half also obey the tea rule. What you are looking at above is the posterior probability that

. It is the posterior probability of a missing observation.

What about those not drinking tea? This calculation is just as before, but now we need probabilities of not drinking. 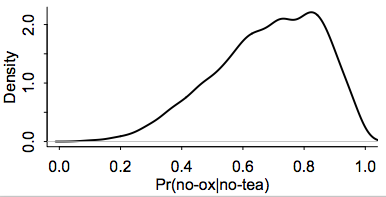 And this is the posterior probability that

. These children are much more likely to be guilty of improper animal husbandry than those who are drinking tea.

So should you check their stables? That depends upon the magnitude of the embarrassment and the importance of catching lazy children. But at least with these posterior distributions, you could do a proper decision theoretic analysis, given those costs and benefits.

In most missing observation models, we'll want to automate the calculation above. The calculations will often be different for each row with missing data, because there will be other covariates that influence the outcome and the outcome might take on more than 2 values. We can add the automation to the model's generated quantities. Here's a quick way to do it. This code will compute the posterior probability that

A vector of values, s_impute, is calculated, one value for each child

was observed, the observed value is stored again. When it was instead missing, the terms from before are calculated and used to compute the posterior probability. This code could be better, by using something more efficient like the softmax function. But the version above is hopefully more useful for learning.

Now when you run the model, there will be a bunch of samples for each of these imputation variables. They will be constant for the observed cases. But they will be samples from the right posterior distribution for the unobserved cases.

This approach generalizes directly to models in which sigma is itself a function of other data (maybe teenagers are less likely to stable their oxen) and the probabilities p_drink and p_cheat are functions of various variables. Just compute the values of those symbols for each case

and then substitute them in.

For a model with discrete parameters, the recipe for defining the Stan model is:

(1) Write the probably of an outcome y[i] conditional on known values of the discrete parameters. Call this

be an index for state, so that in this example

(3) For each state in (2), compute the probability of that state. Your model provides these probabilities, and they will depend upon the details of your model. Call each state's probability

(4) For each state in (2), compute the probability of an outcome y[i] when the discrete parameters take on those values. For example, there is a different probability for each of 11, 10, 01, and 00. You can use the expression from (1) and just insert the values of the parameters for each state. Call each state's corresponding likelihood

. Then sum these products for all states:

is the marginal likelihood, the probability of y[i] averaging over the unknown values of the discrete parameters.

In the actual code, we must do all of the above on the log-probability scale, or otherwise numerical precision will be poor. So in practice each

term is computed as a sum of log probabilities: term[j] = logP[j] + logL[j]. And then we can compute

I've been thinking about these algorithms a lot lately, because I've been working on automating them in my rethinking R package, which is basically a scaffold for using Stan. It guesses at the variable definitions and automates a few things. The Experimental branch (v1.71) has prototype code for automatically generating the required mixture and imputation code. It looks like this, for our oxen example:

The package has done this for continuous missing values for some time. It's a major topic in Chapter 14 of the textbook. Getting the discrete code to work for arbitrary binary predictors has taken more time. If you look at the Stan code—stancode(m2) will display it—you'll see that the code for a general case is much more complex.

Section 15 (page 210 in version 2.17) of the Stan reference manual has several examples of coded models with latent discrete variables.

Some models contain far too many latent states, or configurations of latent states, to efficiently marginalize over. In that case, approximations are available. See for example Fitting mechanistic epidemic models to data: a comparison of simple Markov chain Monte Carlo approaches.